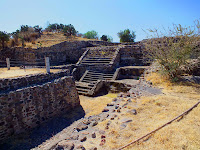 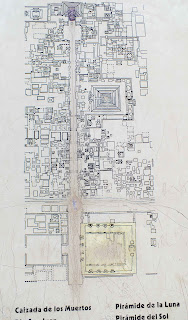 Teotihuacán (place where men become gods) is just outside of San Juan north northeast of Mexico City. Founded before the Christian era this colossal urban center once housed up to 125,000 people and covered 20 sq. km (8 sq. miles). It dominated life in the region for 500 yrs. before being destroyed (it is assumed possibly by its own people) and abandoned around 650AD (we still do not know who built these structures). Later the site was held sacred by the Aztecs who believed it was built by giants and after climbing the stairs I can certainly understand why; they must have had some very long legs and had small feet. Some of the steeps are 15 inches tall and only 6 inches wide.

The ceremonial center with temples, palaces, and pyramids, bears witness to the city’s splendor but has revealed little about its creator and inhabitants. Their origin, way of life and even demise remains a mystery to this day.

Avenue of the Dead runs the length of the present site but once stretched much farther toward the south. The reason for the name was the name was because the Aztecs believed that the buildings lining it were royal tombs. 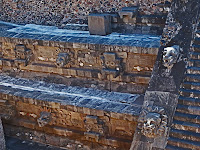 Temple of Quetzalcoatl; Masks of the Plumed Serpent Quetzalcoatl and a god sometimes identified as rain god Tlaloc decorate this temple built around 200 AD, it was later covered by another pyramid which has now been partially removed. 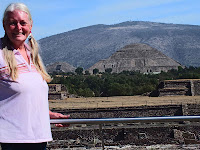 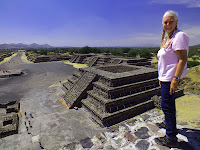 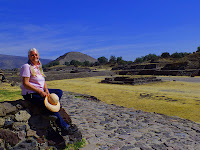 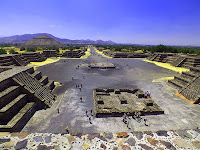 Pyramid of the Moon smaller then the Pyramid of the Sun and has a structure with four tiers. The two structures are the same height but only do to the difference in ground level and it does offer the best view of the entire site. It was so cool standing up on the middle level (we were not allowed to go any higher) and I agree it is the best view of the sight. The base is 433 feet by 500 feet and its height of 140 feet. It is thought that the top of this pyramid held a temple consisting of one room that was divided into three parts. Also it did not have platform at the base in this sense it is likely to have been an area open to the public for ceremonies in which admittance was unrestricted. This pyramid lies at the head of the Avenue of the Dead were a large alter with stairs facing in all four directions lay. 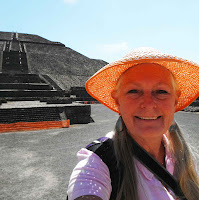 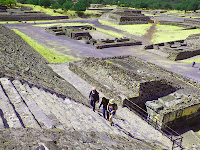 Pyramid of the Sun in sheer size is the largest pre-Hispanic building of the times (100-650 AD) and one of the most important in Mesoamerica. The reason for the name is that the sun god was worshipped at this pyramid. It is thought that the top level was a temple where religious rites associated with the deity for whom the building was dedicated were carried out. 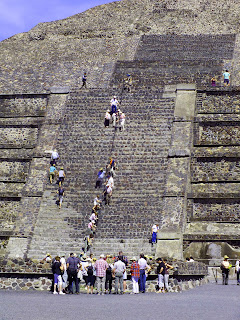 From 1906-1910 a large archaeological investigation was undertaken to celebrate Mexico’s 100 years of independence. It is among the largest in the world and was completed around 200 AD; it is made of adobe bricks and earth covered with gravel and stone. Chambers and a tunnel have been found under this structure but we were not allowed to go in as yet.

Jaguar Mural; a fragment of this mural was found on a wall between two staircases and depicts a large jaguar set against water motifs. This mural was discovered in 1963 during an archaeological exploration.
It is part of a group of platforms and temples that comprise an archaeological unit known as The Puma Complex. This design was found on both sides of the Avenue of the Dead. Here is a portrayal of a large wild cat probably a puma.

Colors of red, white and green were found in the background symbolizing an aquatic atmosphere. The panel molding is decorated with green circles that represent ‘chalchihuites or precious stones. 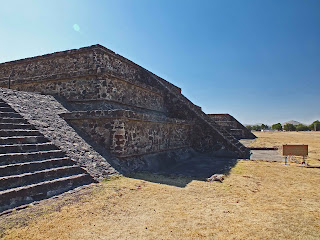 The Great Pyramid of Egypt and the Pyramid of the Sun bases are about the same dimensions but the one in Egypt is twice as tall at 144 meters (472 feet) but it is still the third largest in the world. (My information is from the displays on site, DK Eyewitness Travel Mexico book and my AAA tour book). More information can be gotten from website www.inah.gob.mx.