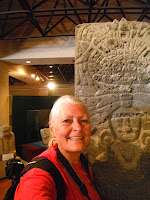 Tula, Hidalgo, Archaeological Zone (www.inah.gob.mx) is 48 miles north of Mexico City. Tula is the Spanish version of the Nahuatl word Tollan, ‘Place of the Rushes (Tules)’. 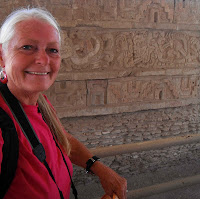 In a number of historical accounts Tula is regarded as the most important city in pre-Columbian Mexico. It was the home of the Toltecs, whose name is synonymous with creativity and artistic capacity. It was also the city of the ‘Plumbed Serpent’, Quetzalcoatl, where the arts and crafts flourished. 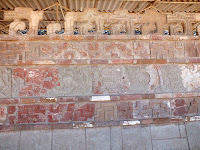 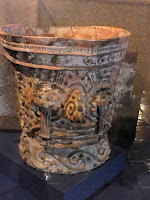 History of the site; the rise of Tula as a great urban center started in the wake of Teotihuacan decline. Tula achieved its highest development was between 900 and 1200 AD during the Post Classic Period. The first in habitants settled at spot known as Tula Chico around 800 AD when a lot of different ethnic groups were settling in the region. The groups that settled in Tula set-up multi-ethnical class groups class society with a wide variety of customs, lore and religious ideas. One of which was the Nonoalcas from present day state of Tabasco and they constituted an elite group of advisers and standard-bearers’ of Quetzalcoatl worship. Another group was the Chichimecas from Northern Mexico.

Shortly afterwards strife among the various sectors of the populace led to disruption and invasion by yet another ethnic group called Chichimecas (Mexicas or Aztecs). These events coincide with the downfall of the ceremonial center and its abandonment, but some dwellers lingered on in some parts of the city. Later, Tula became a mythical, holy place for the Aztecs. 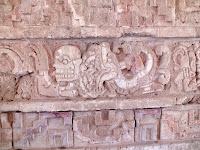 Coatepantli ‘Serpent Wall’ its name was derived from the resemblance of the serpent sculptured walls around many Aztec buildings. It is thought to be dedicated to Tiahuizcalpantecuhtli, one of the appellations of Quetzalcoatl as ‘Morning Star’, since atop it are merlons representing cross sectioned sea shells which symbolize Venus. It has three rows of friezes, the middle one show snakes devouring flesh-thorn individuals who apparently represent the souls of warriors. 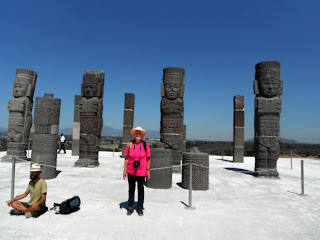 Temple of Tlahuizcalpantecuhtli is a pyramidal structure made up of bodies in echelon and originally covered with carved stones. Those carvings have motifs of eagles and buzzards eating the bleeding hearts. These motifs also have depictions of a human face emerging from the mouth of a snake. The snake is Quetzalcoatl in his designation of ‘Lord of Dawn’ or Tlahuizcalpantecuhtli. There are also a panel of a procession of jaguars and coyotes. 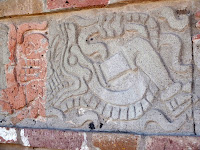 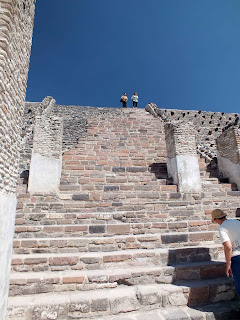 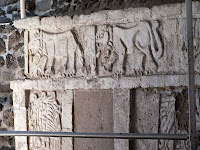 Atop the temple are Toltec warriors in battle gear, including atlatl (spear throwers) in the right hands and bunches of arrows in the left; butterfly-shaped breast plates; over-skirts, each with a large belt knotted in the front and a sun disk at the rear. In addition to these sculptures, several other pillars were also found with these warriors that show a person with a bundle of arrows identified as Quetzalcoatl and a figure of a cipactli (alligator). It is thought that the temple was constructed in honor of the chief Toltec deity; Quetzalcoatl. 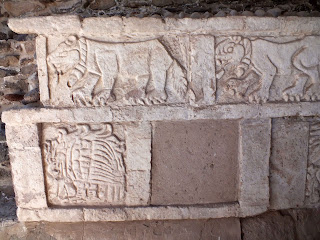 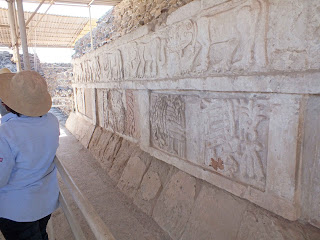 Place of the Columns; there was traces of a fire found here was it was nicknamed Burnt Place. It seemed it was better suited for a place for public administration or as a market, than as living quarters. It is spacious and has three main halls each with its own entrance and an inter patio, ringed with columns for supporting a roof. Inside were found the remains of seats that were adorned with polychromatic flagstone tablets on which can be seen warriors with spears and shields. It is thought that these were meant for priests and lords also there are still traces of several altars and tlecuiles used for making fire. In the hallway there are rows of snakes, some of them feathered others representing because of the cloud symbol they have, Mixcoatl, the ‘Cloud Serpent’. 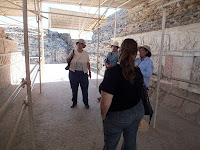 Mound C; although it is almost completely in ruin, there still are remains of slabs of flagstone that show the symbol for Venus or Quetzalcoatl as the ‘Morning Star’. At the NW corner there is the remainder of an Aztec shrine. 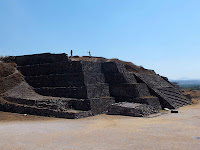 Tzompantli ‘Place of Skulls’ is thought to have been built by the Aztecs and do to the finding of cranium bones; it is assumed that its function was to hold human heads.

A lot of this information was gathered at the site and more information can be gotten by going onto their website (www.inah.gob.mx).
Posted by Unknown at 11:22 AM