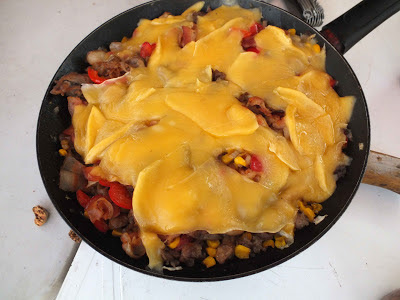 On Christmas Eve I had dinner with a very nice family and they fixed this one pan dish. It was very good and I thought you would like to give it a try. The young man that made it had a name for it but I don’t think he was serious because of the smirk on his face and the fact he had already had several shots of Tequila not to mention the beers he had already drank. So when I met up with them again in January, they live near where the butterflies are, I will find out what the real name is for it or we can call it whatever we want. I’ll take suggestions.

In a large fry pan cook up your bacon, remove the bacon, retain the drippings; then in the same pan fry up some beef, chicken, pork add ham, garlic, onions, corn, mushrooms, chilies and anything else you would like.
Remember that if you’re marking this in the United States you know that we have very fatty meats; so pour off the extra fat or it will end up settling in your ass or arteries. You can substitute ground chicken or turkey for any of the meats.

Spread the meat mixture evenly in the pan, add your bacon back in on top, then add slices of cheese to the top of that, cover and remove from your heat source. Let it cool slightly and allow the cheese to melt then serve with warm tortillas.

You can also serve a verity of extras like tomatoes, hot chilies, avocado, salsa and anything else that strikes your fancy.
This will be a lot so plan on have some friends over to try it with you. Let me know what you think.
Posted by Unknown at 7:30 AM